You are here: Home / News / Beginning of investment supervision works related to the 2nd stage of Mennica Residence project

The 2nd stage of residential project Mennica Residence has just started. The investment is located in the very center of Warsaw, between Grzybowska, Waliców, Pereca and Żelazna streets. Investor – Mennica Polska also this time has selected BatiPlus to perform investment supervision works at the site. 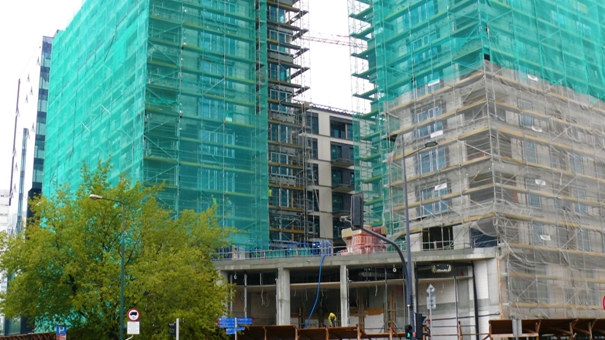 Photo: Facade works on the buildings of the first stage of the investment; view from the crossroad of Grzybowska and Zelazna streets.

In the second stage of the investment, the Aurum office building at Waliców street will be replaced by a skyscraper with 330 apartments along with a multi-storey underground garage.
Since August this year, initial works have begun, including the demolition of the Aurum office building set up in 2001 and the construction of walls protecting the excavation for the construction of an underground garage.

Mennica Polska has declared its intention to preserve the brick wall from the side of Waliców street – a part of the 19th century Jung Brewery, which is a unique monument that became a Warsaw ghetto border during the war.